my life is/as a theme park

Di Ball became known as the Queen of Kochi, a role she happily slipped into. Superficial, unauthorised, unsupported, unofficial, yet available for inaugrations, weddings, parties and everything. Her SWAGADAM (Welcome) poster adorns the walls of the local police station; Her presence is noted in newspapers; the people of Fort Cochin smile and wave as she scooters passed.

But there is a deeper side to the performance of the Queen of Kochi. Di Ball documents and (re)presents her liminal life whilst interrogating notions of identity and in particular ideas which Edward Said described in his book Orientalism (1978), as a critique of the cultural representations that are the basis of how the Western world perceives other cultures such as India. Ball is acutely aware of the issues that are raised in adopting the tile of Queen, despite her performative actions being that of a benevolent, kind, hugging amma and slightly comedic kind. She is not “taking the piss”. The words of Gayatri Spivak ring in her ears: “to refuse to represent a cultural Other is salving your conscience, and allowing you not to do any homework.

The Queen has done/is doing her homework, 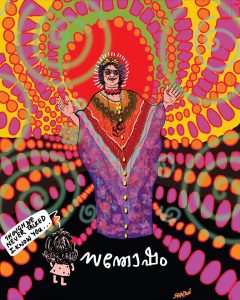