my life is/as a theme park

I have known Shambavi for 6 years as a friend and had seen her Red Kali (1997) when it was included in a show in Brisbane that I was also exhibiting in entitled “Mythopoetica”. I had also seen some works on paper in magazines and catalogues, but I was not familiar with her sculptural pieces.

Anita Dube, the curator of Kochi Muziris Biennale 2018 had included Shambavi in the show, and as someone who was very familiar with the work had selected a room in Aspinwall House and had a clear idea of the objects in that space. I was there to be of any assistance I could logistically and to be a sounding board.

The works that were to be included were Rehat/water garland (2011), Hasiya/sickle (2011), Braille , and selected pieces from the Lullaby(2008) series . These are all farm implements lovingly reworked to confer beauty whilst honouring the physical labour of the worker. “The farmer venerates the earth. She is in awe and in love with the weather cycles that influence earth’s moods, her textures, her often benevolent powers. (…) The earth is magical, mystical through the year and the farmer finds ever new way to thank mother earth for her blessings that sustains her and her family. I find their veneration magnificent, monumental and sacred.”(Resonate. Shambavi. Life in Art (2018) Karmic Design p 53)

Many urban Indian families still have ancestral homes and cultivations in the rural areas and Shambavi spent long vacations with her grandmother in the village. She observed the “fragile and tough existence” of the farmers and how both the landowner and tiller were both “caught up by nature’s cycle (…)Her (the farmer’s) instruments were simple and did not invade the earth’s consciousness, did not trifle with it She would only take out what was essential for her family’s existence.”(Resonate. Shambavi. Life in Art (2018) Karmic Design p 11) This new incarnation of earlier works would bring them to Kerala where her aunt had been one of the few female Governors of Kerala. Ram Dulari Sinha (1922–1994) was a nationalist, freedom fighter, Indian parliamentarian and a Union Minister. She was elected Vice Chairman of the International Labour Organization and was the first woman in Bihar to gain a master’s degrees and also the first woman from Bihar to be appointed as Governor when she became Governor of Kerala.

I find this strong link to both Kerala and the rights of labourers to be extremely interesting in my reading of the new install of Shambavi’s work. In talking with her, she explained her vision as a non literal representation of a farmer’s shed, the tools of labour left waiting for the time for their use, the atmosphere dark with shards of light. On closer inspection the beauty of the reworking of these instruments would come to light with shadows cast and workings revealed. There would be a sense of discard, of a real working life. Rice plants would pop up in the coils and buckets of the water wheel mechanics. There would be a strong narrative of admiration for toil.

The first install placed the object in the space and Shambavi left for home. Upon her return she spent time with the work and saw that is was a very minimalistic placing of objects in the space, like a hang of paintings in a gallery. It was not evocative, but stark. Where was the love, a little sense of disorder? She reintroduced some elements that had been stored, created a little chaos, tested shards of natural lights and placed artificial focuses.

The curator was upset with the new additions and they were removed.

This stripping of the narrative returned the space to a cold space. The works no longer “spoke” to each other setting up a cohesive reading. Instead they seemed to be singular “artworks” arranged in a room. Gone was the farmer’s shed, the sense of a farmer’s labour, the happenstance of the rice plants that escaped into the fold of the machinery.

I don’t write this as a criticism but rather to unpack my own ideas of authorship and curatorship (acutely reminded of Barthes), of vision and outcome, of process and collaboration. As well as being an artist, I am also an architect and I have lectured in Placemaking. I bring these two disciplines together when I am designing or viewing an “installation” and the question I ask myself is if the works speak as a whole or as a collection of objects in the same room. Our beginning line from the subject I taught used the equation place=space +meaning. In order for a place to become something special it needs to be invested with meaning; personal, cultural, mythical, experiential.

Of course this is MY reading and I cannot be impartial as I heard spoken the artist’s thoughts. Of course art is subjective and I must now wait to see if my reading changes as I view the work not as a singular piece but as part of a larger exhibition. As the curator intended. 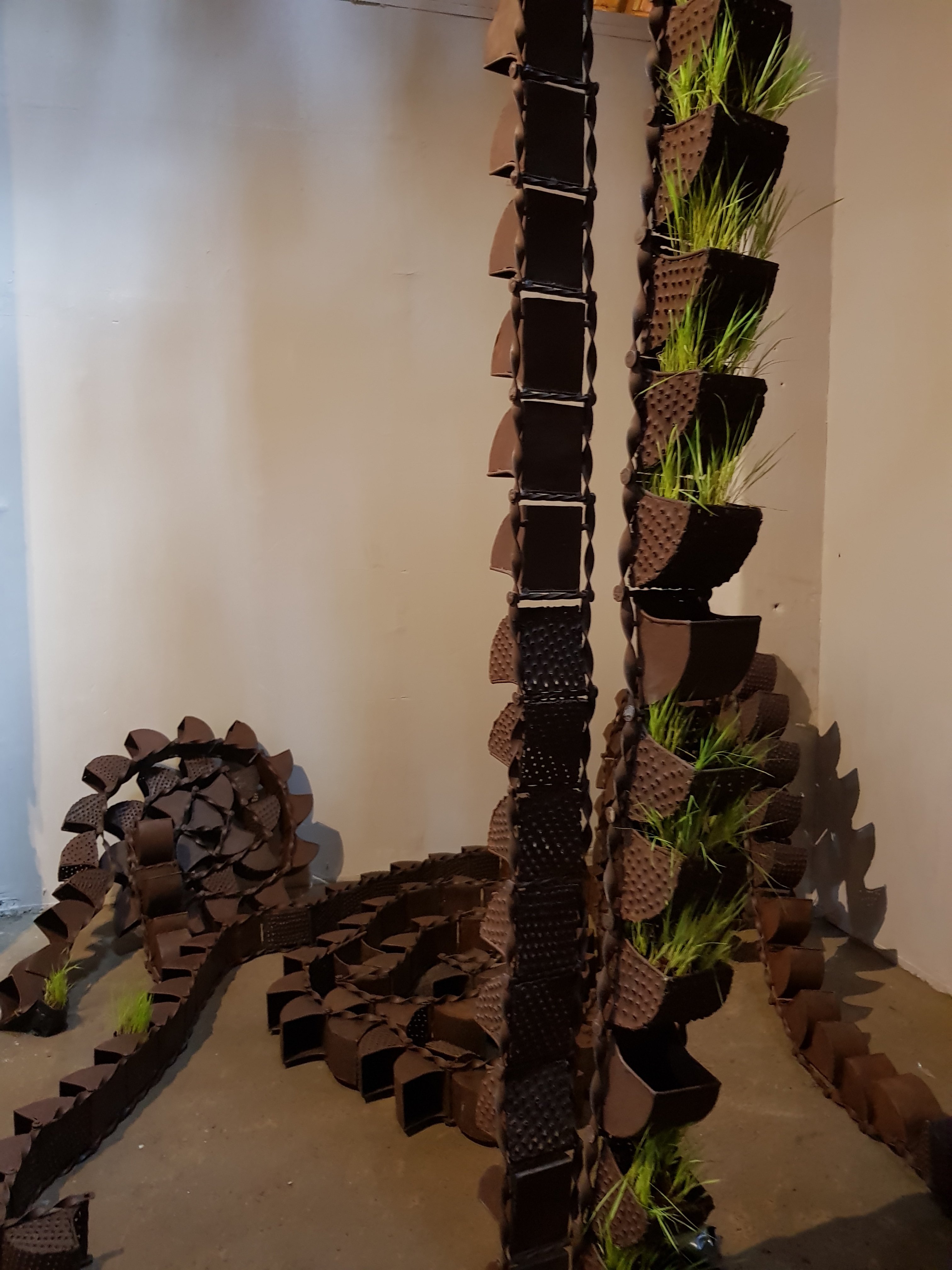